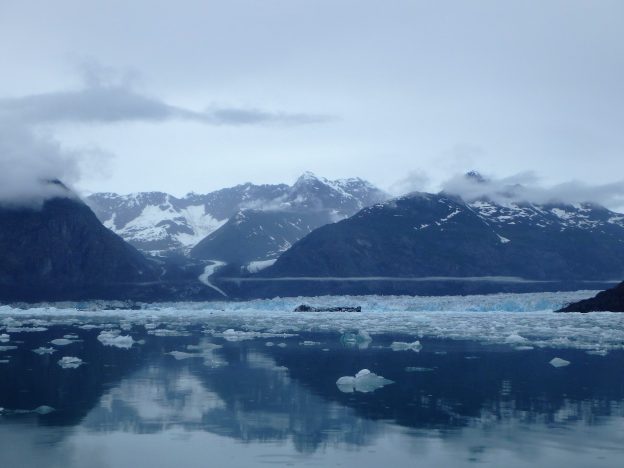 Preface: Get ready for a longer blog about this unforgettable trip. Stick it out to the end to see my top two all-time favorite icebergs, and find out what finally merited busting out the emergency tequila:)

For five days in a row I awoke to the sound of two Brits giggling in their tent. That’s right. . . giggling like school children! (I don’t think they’d mind me saying so.) As I lit the stove to boil water for coffee, gazing out over the ice-filled bay in front of Columbia Glacier, I thought giddily to myself, “somewhere along the line I must’ve made a really good decision if this is what I do for my life’s work”!

I get to share with wonderful people the most beautiful places in the world using my favorite mode of transportation, sea kayaks. This trip, a five-day kayak and camping expedition starting on the south side of Glacier Island and finishing off with three amazing days exploring the recently-revealed landscape at the face of Columbia Glacier, was one of the best yet! A huge thank you and enthusiastic cheers goes out to my two clients, Rob and Anya, who just happened to squeeze in this kayak adventure amidst their lengthy motorcycle tour starting in Washington. Umm, yea. . . they’re kind of badasses on two wheels. Now they can proudly say they’re badasses with double-bladed paddles.

This is Alaska. . . coastal Alaska, so there’s no shame in saying that we experienced some pretty wet and cold conditions, however this was supplemented with sporadic sightings of what we called the strange yellow orb in the sky. No harm done though, as we equipped and dressed ourselves for the occasion. Anya made some important discoveries that wearing two pairs of wet weather gear is considered a norm. Well, why wouldn’t you wear two pairs of rain pants and two rain jackets? And this is where the impressive amount of giggling came into play. Rob and Anya maintained lively spirits, adventurous attitudes, and senses of humor that would have anyone laughing up a storm in any weather conditions. Yellow orb in the sky or not, the three of us had a blast!

Interestingly, both Rob and Anya were reading accounts of polar expeditions, and even though we might have been in cold and damp conditions, their daily updates of expedition parties having to winter in Polar pack ice, put into perspective how plush we had it. After all, we didn’t have to worry about getting scurvy or having to kill marine mammals to eat. In fact, Anya often commented on my seemingly bottomless “Mary Poppins-esque food bags”, from which I pulled out many a fresh vegetable and Prince William Sound delicacies, such as Sockeye Salmon fillets and Cod. We even ran into such good fortune (literally we ran into my friend’s boat as he was chucking shrimp heads into the water) as to receive the delicious gift of fresh Prawns. Now that was a sweet treat!

Along with spending time in the kitchen tent stuffing our faces with my delicious homemade meals, and getting warm and dry, we enjoyed many of the things that make a sea kayak expedition in Prince William Sound such a special and unique experience. We delighted in many wildlife sightings, such as a dozen Mountain Goats that we watched from our kayaks in Columbia Bay. We paddled past the Sea Lion haul-out on Glacier Island to enjoy these gregarious creatures, as well as saw lots of Tufted and Horned Puffins flying in and out of the sea caves that they nest in. Unfortunately, I couldn’t snap a photo of the flying birds. And, of course, we saw quite a few Harbor Seals and the adorable Sea Otter.

The grand finale, the show piece, the main exhibit, the pièce de résistance (you get the idea). . . Paddling through ice to land at a very recently-exposed beach (i.e. one year, as the glacier has retreated back up onto land in this area) between two branches of Columbia Glacier to scramble up rocks like Mountain Goats to set foot on the glacier and glimpse a view of the impressively expansive ice field. Run-on sentence? You betcha. Incredible experience that not many people have had nor will have (unless, of course, you book this trip with me)? Absolutely. This was actually my first time exploring this new terrain along with Rob and Anya, which made the excitement level exceptionally high. I’ve been known to get pretty giddy when I’m seeing something for the first time out there.

That view from the top!

Now, as prefaced, I must share with you my second all-time favorite iceberg that I’ve ever encountered. Want to see my number one? I bet you do. Just look at it. https://ileneinakayak.com/icebergs/ We happened upon this beautiful piece of ice on the return paddle from the glacier face to camp. Rob and Anya had to pretty much pull me away from this beautiful iceberg.

The only way we could think to celebrate such an exciting day at the face of the largest tidewater glacier in Prince William Sound. . . Bust out the emergency tequila!

Our fifth and final day, we paddled back down Columbia Bay, enjoying more ice and a waterfall. I will never tire of paddling around ice.

Well, there you go. How’s that for a memorable trip? After a five-day expedition of any sort, most people want to shower, wash clothes, eat, and sleep. Rob and Anya gloriously completed the first three, then were adventurous (and surprisingly awake) enough to cram into the backseat of a car, drive out of town, and assist me in setting up my Arctic Oven, which is a 12′ x 12′ tent with a woodstove in it. Upon completion of set-up we hauled four lawn chairs into it, cranked the stove, and commenced a giggle-fest about funny American and British terms.  I guess we all say the darndest things.

Thanks for reading. Stay tuned for more Alaskan adventures in a sea kayak.